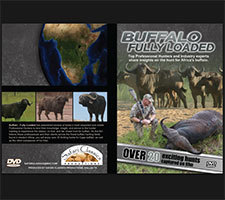 Buffalo - Fully Loaded is the latest release in Safari Classics Productions long list of films highlighting the adventure and drama of hunting Africa’s Dangerous Game. Over the last decade, no other animal has attracted the attention of the Safari Classics cameras, or the hunters they shadow, as has Africa’s most popular dangerous game animal…the Cape buffalo.

As new generations of hunters journey to The Dark Continent to test themselves against this legendary game animal, they join legions of safari veterans who unhesitatingly place the buffalo at the top of the list when it comes to the pursuit of Africa’s deadly adversaries. While the Cape buffalo regularly gets the lions share of attention in serious safari circles, he is but one of several species of wild cattle that inhabit Africa, all of which qualify as worthy, and dangerous big game in their own right.

Buffalo - Fully Loaded will examine the various sub species of Africa’s buffalo from their physical makeup, geographic locations, habits, and preferred hunting methods. Beautifully captured hunt sequences for each of these lesser known buffalo sub species truly set this film apart from other buffalo themed projects of the past.

Buffalo - Fully Loaded has assembled several of today’s most respected and visible Professional Hunters to lend their knowledge, insight, and advice to the hunter wanting to experience the classic, on foot, and fair chase hunt for buffalo. As the film follows these professionals and their clients across the finest buffalo hunting fields found in modern Africa, you will enjoy over 25 thrilling hunts for Cape buffalo, as well as the other subspecies of his tribe.

This film covers all the relevant countries and topics of interest to the buffalo hunter, and will fully prepare any safari client for the realities of this specialized hunt.

Save this product for later